January saw two fund raisers for a couple of the Beaufort’s favourite
causes – St Wulfstan (the first to get slavery banned in Bristol in the 11th
Century) and the Long John Silver Trust.

The first managed to raise £100 for St Mary’s Church, Hawkesbury, on the
occasion of Wulfstan’s Saints Day (January 19th) with a banquet in his
honour in the pub.

The second, on Thursday 28th January, with a brewery visit to Cotswold
Spring’s and Severn Vale’s magnificent new home at Tortworth which raised £80 for
LJST (thanks mostly to their generosity).

The picture shows our very own Bishop of Wigan, Stan
Fillingham, getting a chair lift at the brewery with bearers Tony Harcourt
and brewery owner Mark Francombe.

Many thanks to all who attended and contributed to the two events. On the
latter we had a terrific reception at the Salutation at Ham and once again
Westward Travel ably provided the transport. 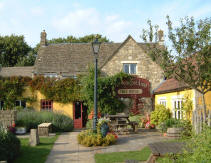